Goricanec/Huberli earned a bye directly into the second round of qualification where they defeated Martina Bonnerova/Barbora Hermannova from Czech Republic 2-0 (21-15, 27-25) in one of the longest women’s matches of the day at 59 minutes. 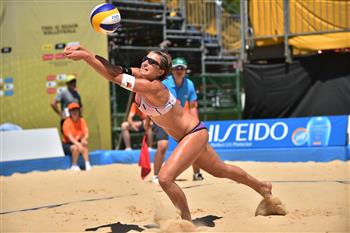 Turn up the heat in Yokohama

The two European teams began evenly before Goricanec/Huberli took the lead at 13-12 unnerving Bonnerova/Hermannova and securing a run of points to close the first set. Conditions on the side courts saw blasts of wind followed by absolute calm providing challenging for both teams.Â

“On one ball I was in reception and I thought OK no wind, let’s play like this, then I played the reception and when she set the ball the wind was just coming and I was really early and under the ball, so I think it’s kind of hard because the wind changed every ten seconds and it’s hot and I think it’s difficult to play, but everyone has the same conditions,” said Huberli.

“Honestly I prefer to play in conditions like this when it’s sunny and warm than cold weather and rain,” said Goricanec.

The second set saw another even match up with a back and forth fight that Switzerland finally closed 27-25.Â

“The qualification games are always a bit nervous games and not very fair because you have to win, you have the pressure otherwise you are out and I think it’s perfect that we did it and we’re in the main draw now,” said Goricanec.

“It was a really tough game especially the second set, when both had time-outs around 18-16 so it was a long way to 25, it was really tough. But I think everything wasn’t perfect yet, but it was the first step in a good direction,” said Huberli.

Goricanec/Huberli finished outside the final 16 in all three FIVB Major Series events this year and also at the World Championships in the Netherlands.Â

“I hope tomorrow there is going to be a bit more cloud up there. No, I think we have to analyse that game and now we can just play and have no more pressure anymore. We have had a tough season up to now with injury and some bad games and some good games, but against good teams, so we lost those games too, so I think for now for us it’s a new start. Last year when we played the qualification we played way better than we played this year, so I hope this tournament is going to change the results for us for the rest of the season,” said Huberli.

Russia’s Maria Prokopeva/Ekaterina Syrtseva also secure a spot in the main draw after sealing the victory over Stefanie Schwaiger/Barbara Hansel from Austria.

The first set went smoothly for Russia, but Austria began to pull points back in the second, creeping up on Prokopeva/Syrtseva before taking the lead at 17-17 and going on to take the set. In the third some excellent play at the net by Prokopeva helped the Russian women close out the match 2-1 (21-16, 20-22, 15-12).

“We’re very happy that we can win and that tomorrow we have a chance that we can play in the main draw because last two/three tournaments we didn’t play very well and now we are so happy,” said Prokopeva.

“I think in the first set we played OK, especially in the second part of the set. Second set we also started good, but then I don’t know what happened, maybe we are a little bit tired. The conditions are very hot today, but also they are a very strong team. In the third set, we had good side-out, some good defence, some good serving, we are happy.

“For us the conditions are a little bit difficult because in Russia, for example, my city St. Petersburg now is 15Â°C and here it’s unbelievable, very hot,” said Syrtseva.

Joining the Russian team in the main draw is Brazil’s Lima/Fernanda and Carol/Maria Clara, both safely through to the main draw after each posted a win against Japanese pairs, Miyuki/Matsuyama and Murakami/Ishii.