Steph Cook is one of five women who have won the ultimate prize in Modern Pentathlon â the Olympic gold medal. But for four years she stood alone on that pedestal.

It was the dawn of a new millennium. The year 2000 in Sydney (AUS), a new era for the Olympic Games and especially for Modern Pentathlon, which finally had the gender balance that today we take for granted.

After many years of campaigning and lobbying, the Womenâs Modern Pentathlon had been introduced to the Olympic Games programme and 28-year-old Cook (GBR) summoned all of her iron will and awesome athleticism to become the first woman to scale the top step of that famous podium, inspiring countless women and girls in Great Britain and around the world.

Now aÂ Member of the UIPM Hall of Fame, Cookâs career at the apex of Pentathlon was relatively brief, but she crammed an incredible amount of success into a short period. When she retired in 2001, to resume her medical career, she did so as a reigning Olympic, world and European champion who had picked up three World Cup gold medals in three years.

Born in Scotland and educated in England, Cook (GBR) had started her Pentathlon career while studying medicine at Oxford University. She was already a competitive rower but was drawn to PentathlonÂ through her background in Riding and Running. It was her speed and stamina that enabled her to cut through the field from sometimes distant positions and reach the podium.

This is what happened in Sydney (AUS) where she came from behind to claim a stunning gold, racing past her training partner Emily deRiel (USA) in the final 300m of the cross-country having already overtaken her compatriot Kate Allenby (GBR), who picked up the bronze.

Cookâs gold was Great Britainâs first Modern Pentathlon medal and, more fundamentally, the first ever won by a female of the species. On International Womenâs Day 2020, we invited the pioneering Olympic champion to look back at the wider significance of her seminal triumph.

Q: What were your expectations heading into the Sydney Olympics?

A: For about six months to a year beforehand, my performances had become more consistent. Iâd won a World Cup in Mexico to qualify for Sydney and I won silver at the European Championships in Hungary, so I was up there gunning for the podium and I was ranked joint No.1 in the world along with an Italian, Fabiana Fares.

Having said that, I was more under the radar because Kate Allenby was the better-known British pentathlete who had been on the scene longer than I had, and I was quite happy to stay under the radar a little. I knew that I was potentially in with a shout of winning a medal, but with a sport like Modern Pentathlon there are so many different factors that come into play.

Q: Did you feel you had the mental strength to perform under the spotlight of the Olympic Games?

A: I remember looking at the women I was competing against and, because that was the first time women had been included at the Olympics, it was a level playing field from that point of view. None of the women had competed on that stage before.

I believed there were at least half a dozen athletes who had a chance of winning, certainly from a physical point view, and I think a lot of it came down to what was going on mentally. I had always known that my Running was strong, and as soon as the Riding was over I knew I was only going to move up from where I was.

Iâd told myself in advance of the competition that if I was within one minute of the leaders going into the Running, I would stand a chance of reaching the podium.

Q: Did you notice a rapid improvement in standards in womenâs pentathlon before and after Sydney 2000?

A: Yes. Definitely. The year before, we had the World Cup Final in Sydney as an Olympic Test Event, and the British Olympic Association arranged a camp on the Gold Coast. I remember speaking to one of the team psychologists and we looked at where my performance was and also where it needed to be in a yearâs time, based on the trend of other athletesâ performances. Standards were improving massively across the board.

Q: How aware were you â and the other 23 athletes in the field â that you were making history in Sydney?

A: I think it really was a landmark point. Four years before, Iâd watched the Menâs Olympic Modern Pentathlon on TV and I had only just started the sport a few years before that. I knew that a lot of people had been campaigning long and hard to get Womenâs Pentathlon into the Olympics, and I think we were all aware that we were making history by being there.

It was a big moment. And in some ways, particularly because the sport of Modern Pentathlon had been created by Baron Pierre de Coubertin, it was even more poignant to have women competing on a level playing field with men at the Olympics. 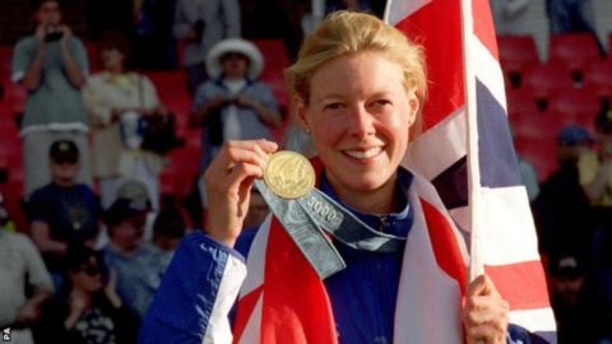 A: I think they are probably very similar. I think I am quite a driven and motivated person. I think I put a lot of pressure on myself and Iâm a very competitive person â not necessarily against other people but against myself. Iâm a bit of a perfectionist in that sense.

I used to train like a lunatic, I think some people would probably say. I did train really hard and when I had the opportunity to put my medical career on hold and move to Bath to train full time, it was an incredible opportunity.

But I never set out to do Pentathlon to go to the Olympics. I started the sport at university because I missed Riding, I missed horses. I wanted to do something a bit different as well.

I had a background in Running and Riding but I couldnât even tumble-turn when I started Swimming at university, and I had never taken part in Fencing or Shooting. But that was what was really inspiring for me â taking up completely new sports. Iâm the sort of person who doesnât want to get bored, either, and when you do five different disciplines you donât get bored. Thereâs always something you can improve on, and that appealed to me in terms of challenging myself.

Q: How closely have you followed Modern Pentathlon since you retired in 2001?

A: I keep up to date with whatâs going on. I have commentated for BBC at the Olympics in Athens, London and Rio (I missed Beijing because I had a young baby at that point), and I enjoy keeping an eye on it.

I attended the recent European Championships that have been held in Bath and I follow whatâs happening â I know that Jo Muir (GBR) has just won the Hungarian Indoors as well as Pentathlon World Cup Cairo, which is amazing.

Q: What do you think of the format changes that have been implemented since Sydney 2000?

A: I think it has still fundamentally stayed true to the sport. The biggest change has been the Laser Run, which has only added to the excitement at the end because itâs so much less predictable now. Iâm not sure that I would have favoured it as an athlete, and Iâm quite glad that in my time it was how it was!

Thatâs been a big change, and with the Fencing Bonus Round, Iâm slightly sceptical about that because the points difference it makes is limited, and itâs more for the spectators. The one-stadium format again is an interesting concept, and again Iâm slightly sceptical about how it will work, but at the same time a sport has to be flexible and adapt and develop to enable it to continue to survive in the current climate.

I hope it stays true to the sport, but obviously there are changes that have to be made to keep the sport within the Olympic programme. We donât want to see Modern Pentathlon fall by the wayside as other sports have.

Q: How important is gender equality in sport?

A: I think itâs hugely important. It can be difficult in some ways to appreciate what itâs like not to have that equality. I still remember the days when the distances in Modern Pentathlon were changed to make it easier for women. When everything was equalised it was very important.

I look around other sports and I see prize money being equalised, and womenâs sport is being much better recognised by the media, and the quality and level of sport is rising.

Itâs got a long way to go in terms of things like football and rugby, but I think there has been a fundamental shift over the last few years which is only accelerating, and pressure is being applied to make sure that itâs equal. Thereâs no reason why it should be any different for women, because the quality of the sport they are doing is as good as the men â itâs as exciting to watch.

Modern Pentathlon is brilliant as a sport to have men and women competing on the same terms, and the other great thing has been the addition of the Mixed Relay. Thatâs showcasing the fact that men and women are competing alongside each other in a relay competition.

Iâm really proud to say that Modern Pentathlon has been leading the way in gender equality. We got women into the Olympics and that was the crucial point, and that was 20 years ago, and now I find it hard to imagine that it would have or could have been any different.

Iâve grown up thinking that thereâs no reason why I canât do the same thing as the person next to me, whether they are male or female. Iâve been lucky to have had so many amazing opportunities, and there is an expectation now that there is gender equality and it shouldnât be any different.