Dalilah Muhammad calls it her epiphany, the moment that set off a chain reaction for all that came next: Olympic gold, world record and – on Friday night at theÂ IAAF World Athletics Championships Doha 2019Â – a long-awaited world title. 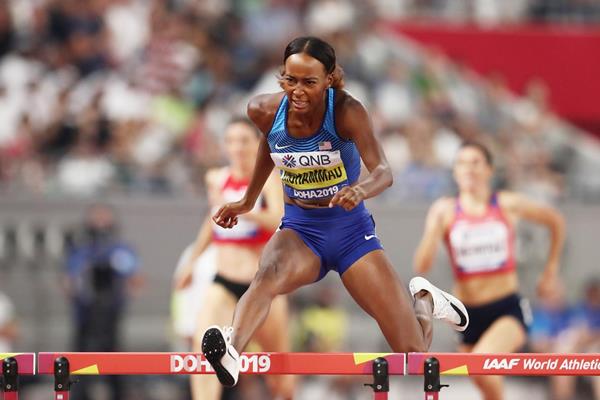 To get that gold, she not only had to be the fastest athlete on the night, but the fastest of all time. Ten hurdles, 52.16 seconds, one lap of the track and a place firmly established among the all-time greats.

But back to that epiphany. It was early 2016, Muhammad was 25 years old and coming off a season where her talent had failed to truly fire. Two years prior, she had won world silver in Moscow but 2014 and 2015 were mediocre seasons, the New York native struggling with a string of injuries.

She picked up a quad strain in an early-season race in 2014, ran on with it and made things worse, her form never hitting the highs of the previous year. Her issues lingered in 2015 and in February of 2016, she parted ways with coach Yolanda Demus and linked up with Lawrence Johnson, who trains a group of high-level hurdlers at his base in Northridge, California.

It was around then she had a realisation.

“Why not me?” Muhammad recalls herself thinking. “Someone’s going to win the 2016 Olympics so why can’t it be you? You fought really hard in 2013, so let’s go for it.”

She adds now, almost four years on, “that’s what I’ve been going with ever since.”