Mi Jung Hur fired a five-under-par 66 – the joint lowest round of the day – in wet conditions to earn a four-stroke victory in the Aberdeen Standard Investments Ladies Scottish Open at The Renaissance Club. 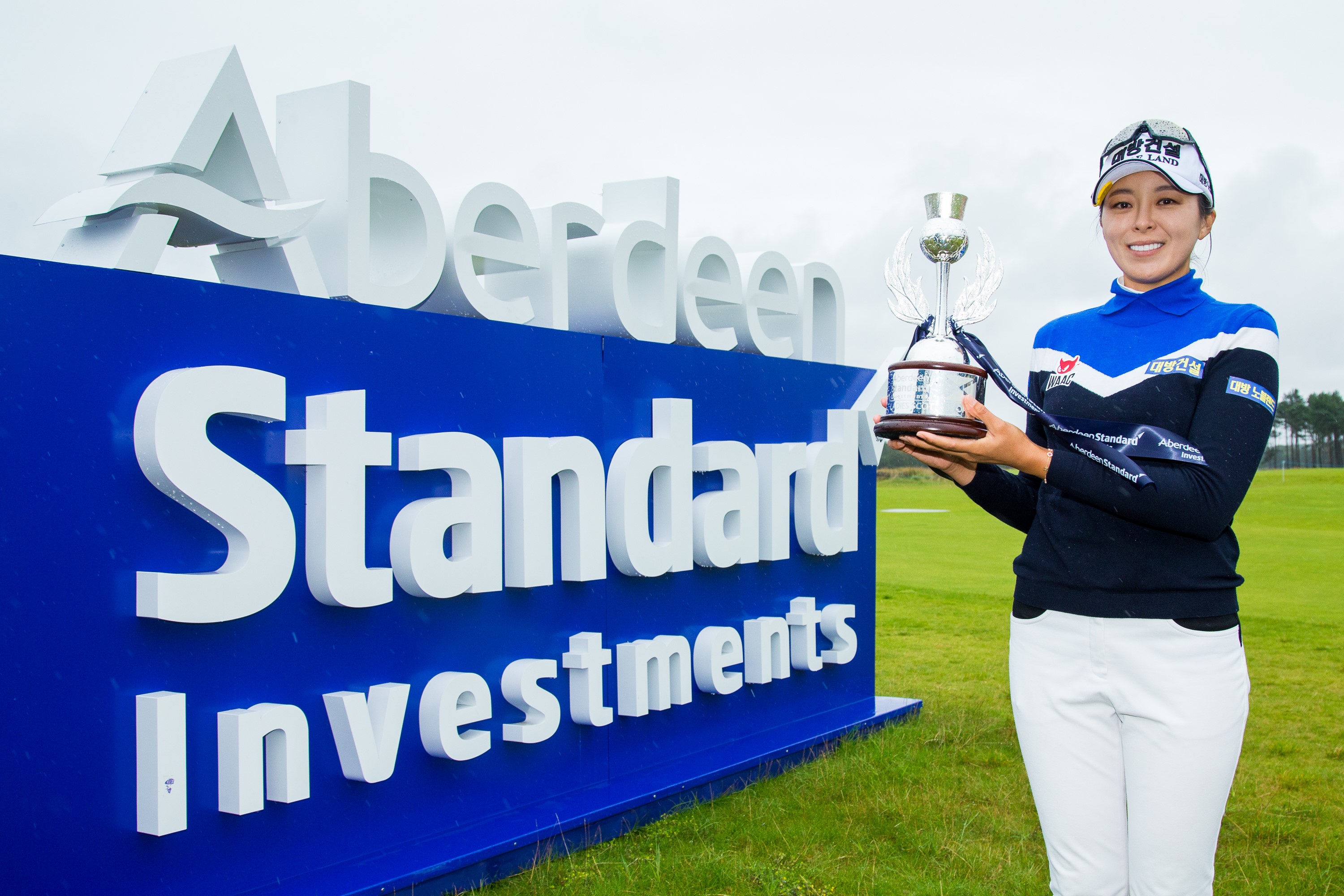 The 29-year-old South Korean, who led by two at the halfway stage of the tournament after a nine-under-par 62, came from a stroke back entering the final round to win on 20-under-par.

Despite having set the tournament scoring record after two rounds, and having earned a runner-up finish in the event at Dundonald two years ago, she revealed that she had never previously been a fan of links golf.

“Actually, I don’t like links courses, but after this week, I love them,” said Hur, whose neon yellow waterproofs were decorated with the slogan “Win at all costs.”

Hur claimed her first LPGA Tour victory as a rookie in 2009 and then another five years ago in 2014. Five years had passed since her last title and this was her first victory as a married woman, after her wedding last year. She thanked her Scottish caddie, Gary Marshall, for helping to keep her clubs and balls dry and for encouragement throughout the severe and changeable conditions over the four days.

“On the first day, I made a birdie and then two bogeys. Then he told me on the fourth hole, come on MJ, you can win this. He said that again today again on the fourth tee after I’d just made a three-putt, so that helped a lot.”

Hur began her final round with a bogey on the third hole and trailed after eight holes, but made her first birdie of the day on the par-3 ninth, sinking a putt from six feet, to enter a four-way tie for the lead.

After making her fourth straight birdie putt, from around nine yards, on the par-5 12th hole, the Texas-based professional felt that she could win the tournament.

She made another great putt from five feet on the 16th to take a three stroke advantage and then polished off the round with her sixth birdie of the day on 18.

The US Women’s Open champion Jeongeun Lee6 (70) and third-round leader Moriya Jutanugarn (71) tied for second position on 16-under, with the 2017 champion Mi Hyang Lee a stroke back in fourth place and the 2018 winner Ariya Jutanugarn two shots further adrift in fifth.

With a tie for sixth, alongside Minjee Lee and Elizabeth Szokol, Anne Van Dam moved up to second on the LET Solheim Cup points list, while Carly Booth tied for ninth and won the Douglas Lowe Memorial Trophy as the top performing Scot in the tournament, after a final round of level par 71.

The first eight players have been confirmed for the 2019 European Solheim Cup team.Â

“My shots were pretty good, especially my approach shots on most of the holes but my putting was a little bit shaky, I could have done a little bit better on the green. I'm pretty satisfied with all my scores and shots, and I have made a lot of good memories this week playing for the first time on a links golf course.”

“It was a tough day for everyone. Good weather on the front nine and pouring rain on the back. I had a pretty bad start but tried to get it back and just give myself a chance out there. I wasn’t really focussing on the lead or anything. I just think if I play good golf, it should be a good chance. I have a lot of good things to take from this week.”

“If I was asked to have that score at the start of this week, where that was the position I was going to finish, I would definitely take it. It would have been really great if I didn't have the two bogeys on the last three holes but I've had a really good week and my game is really coming along. It's positive going into the next few weeks. It's a big difference when you're playing against some of the best in the world. The standard is so much higher. I didn't perform last week just purely putting and this week, I went back to the putter I was originally using and it worked better today.”

On winning the Douglas Lowe Trophy: “See. I love coming back home.”