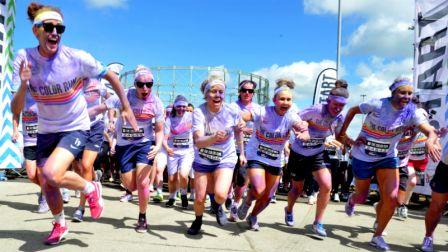 On Saturday July 5th, Manchester went Color Crazy as more than 10,000 runners took part in the Color Run at the Etihad Campus. The Color Run is a 5k race in which participants get covered in powdered paint at every kilometre. 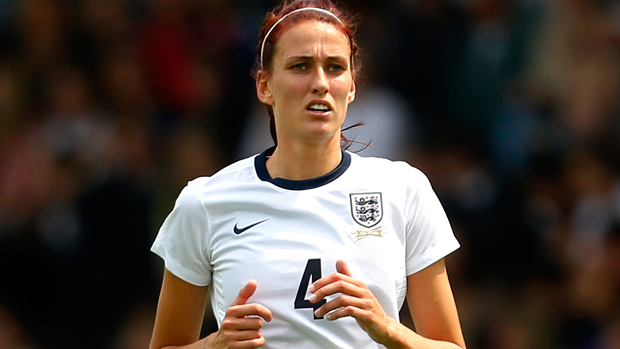 Amongst those taking part was the Manchester City Women’s Football Team. Afterwards, Ed Uff had the chance to talk to Jill Scott - Midfielder for England and Manchester City.

Hi Jill, can you tell us a bit about the Color Run and how you got involved?

It was really good fun, a few of the girls had seen it advertised and we thought it would be a good opportunity for us to join in (and, being at the Etihad, it was really fitting). We had a few girls running with us who are big football fans (four up-and-coming young footballers, who train at the player development centre with City in the Community (CITC)). We want to inspire more people to play football, so it was great that the girls got to come on the run with us - we had to be a little bit careful though because we had a game on the Sunday, but we all enjoyed it.

Were you able to stay for the party at the end of run, or did you have to get back for training?

No, we had to get back as we had a game on Sunday, which we won 2-0. Now we are preparing for our next home game, which is on17th July against Notts. County (7.45pm kick-off at the Athletic Stadium at the Etihad Campus). We are trying to get as many people to come along as possible - we’ve been getting good crowds and want to encourage even more people to come along. We’re looking forward to the game, the season’s going well and hopefully we can keep getting a good run of results.

I’ve enjoyed every minute of it. I’m now 27 and this is the first opportunity I’ve had to train full time. We’re playing some good football at the minute and we’ve gelled quite quickly for a new team. There’s still a long way to go, so we’re just taking it game by game, but so far so good.

What’s the team’s target for the season? Could you win it?

I think it’s difficult to predict where we’ll finish, with it being a brand new team. You’ve seen from our results that we started on a bit of a downward spiral - we lost the first three or four matches, then won four, then lost one, then won one. We need to get more consistency in our play and hopefully we’ll start getting the right results. It would be wrong of me to say ‘we’re definitely going to win the league’.  The important thing is we are learning from each game, and we are training hard to put certain things right and come back stronger for the next game.

Can you give us an a idea what a day in the life of a professional footballer is like? What does it take to get ready for each game?

It’s a lot of hard work. We’re in from 8.30am - 4pm most days, with a recovery day (which is very important). There’s running, weights, tactical work, technical work - it’s not just showing up on a weekend and seeing how we get on; a lot of preparation goes into it, especially from the staff. We’re trying to come up with a ‘no excuses’ scenario, where throughout the week we do everything we need to - in order go out and perform well on the Sunday. There are no excuses for us having a bad game. It’s hard work - but I’m sure there’re a million girls who’d like to be in this position - and I know we all feel very privileged and want to work really hard to get the right results.

What would be your advice be to girls wanting to get involved in football? And what does it take to get to the level you’re at now?

I think that when they are quite young the main thing is to enjoy it. As you get older, it takes up a lot of your time - at one time it would have been how does football fit into your life, now it’s how does life fit into your football. It’s definitely about enjoying it and just working hard. If you make it through the hard work, then you’ve earned it - and if things don’t go to plan then you can’t have any regrets and wish that you’d worked harder. For me, when growing up, it was always about two things: one, work as hard as I could at every opportunity and, two, also enjoy it and play with a smile on my face. Twenty years on and hopefully I’m still doing that – although maybe I’m a little bit slower now!

How much has women’s football changed from when you started to now?

I feel quite lucky - I was involved at the England U19s level and then broke into the Seniors when central contracts were put in place. I had a lot of friends who were older than me who had to work full time and thus were juggling jobs and training. They were tired all the time and weren’t getting paid a penny for doing it - so it’s fantastic to that things have now changed and continue to change. So things like crowd attendance - you probably used to get 50 people turn up and most of those people were players’ family members. Now we get crowds of about 800 - 900. It’s fantastic to see, and if we can keep making small changes and stepping in the right direction, then hopefully women’s football will keep growing and growing and more girls will get involved.

Having represented England at the World Cup, and Great Britain at the Olympics, you’ve played in front of really big crowds. Do you hope that in five or 10 years you could be playing to those kinds of crowds more regularly?

I don’t know if I’ll still be playing in ten years! But it would be fantastic!at the the Olympics, there were 75,000 people at the game (Team GB beat Brazil 1-0 at Wembley Stadium). It was probably the first time I’ve been nervous playing football. We know we’re not going to go from crowds of 700 to 70,000 - but if we can keep increasing the attendance figures, then we’re headed in the right direction!

The Color Run is all about promoting happiness, healthiness and inspiring people. What would you say your happiest memory, to date, of being a footballer has been?

I’d have to say the whole Olympic experience. It was fantastic to be around all the athletes at the Olympic Village. Tom Daley was there, the men’s football team was there - seeing all the different athletes and different sports, and experiencing those amazing home crowds, was great. The Olympics will definitely be something I’ll never forget. I can’t see another tournament replicating that.