Disability Sport Events (DSE) held the Nationwide National Junior Swimming Championship at Ponds Forge in Sheffield this weekend. Nationwide Building Society sponsored the event where over 200 young Paralympic hopefuls competed. Three World, six European and numerous British records were broken in the championship highlighting the importance of such an event. 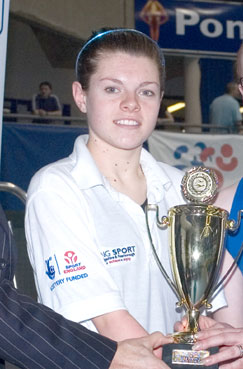 Two further European records were broken by Louise Watkin in the 50m and 100m Freestyle events. The Kelly College swimmer beat both of Claire Cashmores records in the S9 class, with new times of 30.31secs and 1min05.14 respectively. Lauren Steadman in the same class also showed she is a talent to watch, finishing second behind Watkin in all races. Steadman from the East region was awarded the Nationwide bursary for the girl’s older age group.

Claire Warne from Luton claimed the final European record in the 200m SM5 Individual Medley. Warne broke her own record of 4mins01.63 with a new time of 3mins52.40.

Alexandra Adams was awarded the Nationwide bursarie in the younger age group for their outstanding performances. The East region was pleased to pick up the Team trophy, sponsored by the Novotel Sheffield.

Maxine Taylor, Nationwide’s Divisional Director for Corporate Affairs, said: “Nationwide Building Society is very proud to support DSE and all the athletes who compete at these events throughout the UK. We hope our sponsorship will enable more disabled athletes to take part in these events and that they continue to break records, both personally and internationally.”

Gordon Neale, Director of Events for DSE, said: “Through the support of Nationwide and our many volunteers, we are able to host a variety of events throughout the year for people with all abilities, whether they are just starting to learn a sport or going for gold at the Paralympics. New athletes and swimmers are always welcome at our regional events as these are the perfect environment for new participants to learn and enjoy their chosen sport. All information is available via the DSE website for both participants and volunteers, who are always needed and welcomed at our events. Without the dedication of volunteers our events just wouldn’t happen.”