TACTIX AND MAGIC FIGHT IT OUT TO ANOTHER NAIL-BITING DRAW FAST-FINISHING MYSTICS PIPPED AT THE POST
Golf - 24. November 2007.

Perth, Australia – November 22nd, 2007: The season ending ADT Championship on the LPGA Tour is complete, the yearly rankings are finalised and the final list of players who have qualified for the Lexus Cup have been announced.

With less than three weeks until the Lexus Cup 2007 tees off at the Vines Resort and Country Club from 7-9th December, the girls can now look forward to the team event that wraps up this exciting and hard fought season on Tour.

Captains of Team International and Team Asia, Annika Sorenstam and Se Ri Pak respectively will each be joined by seven players who have qualified from the Rolex Women’s World Golf Rankings and the LPGA Official Money List.

Suzann Pettersen and Cristie Kerr were already confirmed after strong performances earlier in the season placing them as numbers four and five in the Rolex Women’s World Golf Rankings respectively. Kerr retained her form for the ADT Championship and wrapped things up with a fourth place finish. Pettersen returns to the Lexus Cup after a one year absence and will be looking to finish her best season yet in style after slotting into second place on the LPGA Official Money List.

The two remaining spots from the Rolex Women’s World Golf Rankings for Team International go to Morgan Pressel and Annika Sorenstam. Morgan has enjoyed a solid second season on Tour and became a Rolex first-time winner and the youngest major championship winner in Tour history when she clinched the Kraft Nabisco Championship in April. Annika may not have any silverware this year but she sits comfortably in third place on the Rolex Women’s World Golf Rankings and enjoyed six top-ten finishes. 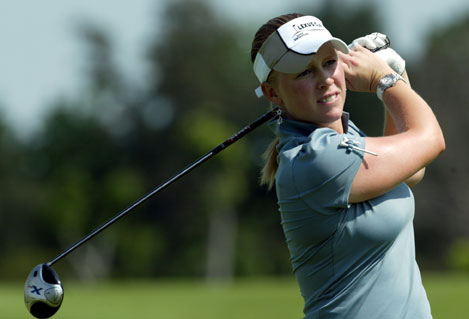 The LPGA Official Money List is used as the qualification criteria for the next four members of Team Asia and Team International. Ending 2007 on a high with a second place finish at the ADT Championship and returning to Team International is Natalie Gulbis. She claimed her maiden victory on the LPGA at the Evian Masters in July and was also part of the victorious U.S. Team at the Solheim Cup.

Gulbis’ 2006 team mate Brittany Lincicome also returns to the side having won the Ginn Open title in May hosted by her team captain and a further three top-ten finishes. Maria Hjorth hails from Annika’s home territory of Sweden and debuts at the Lexus Cup in Perth. After a victory at the Navistar LPGA Classic and her third appearance in the Solheim Cup, her confidence and team experience will be valuable to Team International.

2007 Louise Suggs Rookie of the Year Angela Park is the final confirmed player for Team International from the rankings criteria. This 19 year old is the first Brazilian to win the award and will be riding high, keen to show what she can do amongst her peers.

Captain for the third year Annika Sorenstam is confident in the players she has under her wing so far, “I am very excited that my Scandinavian pal Suzann Pettersen has qualified and has confirmed her participation. Suzann is having a tremendous year, with five wins on the LPGA Tour, including a major, and one on the Ladies European Tour.

We have some exceptionally strong minds in our team – these players are young, dynamic and already at the top of their game. Their energy can push any team to a higher level, and I am glad to have them on my team.”

The confirmed line up to date for Team Asia looks equally strong. Like Annika, Se Ri Pak also qualifies through the Rolex Women’s World Golf Rankings. With her recent induction into the World Golf Hall of Fame, she is the perfect captain and role model for her Asian compatriots who make up the qualifiers for Team Asia.

Teenage sensation Ji Yai Shin plays on the Korean Ladies Professional Golf Tour but has shown her merit by recording a fourth place finish in 2006 at her only LPGA event so far, the Kolon-Hana Bank Championship. She ends 2007 in an amazing eighth place on the Rolex Women’s World Golf Rankings and is sure to make an impressive debut for Team Asia.

Jeong Jang was part of Team Asia in 2005 and returns after passing the US$5million mark in career earnings this season and maintaining her position as one of the top Korean golfers after eight years on Tour. Jee Young Lee qualifies through her 14th position in the Rolex Women’s World Golf Rankings this year and will build on her strong performance of two wins and a loss at the 2006 event in Singapore. She recorded a tied-second place at the Women’s British Open and with 10 top-ten finishes from 24 starts this season; she is one of the most consistent players on Tour.

The LPGA Official Money List qualifiers for Se Ri Pak’s side are also dominant Koreans. Returning Lexus Cup member Shi Hyun Ahn made six top-ten finishes for 2007 and moved up to 27th place on the LPGA Official Money List. This is just ahead of In-Kyung Kim who finished 31st and will be making her first Lexus Cup appearance. Kim is in her rookie year on Tour with her second-place finish at the Wegmans LPGA being the highlight of the season.

In-form Sarah Lee also debuts at the Lexus Cup on the back of her finest season yet. On her fifth year on Tour, she’s recorded seven top-ten finishes including second in the Sybase Classic and sixth spot at the ADT Championship.

Seon Hwa Lee who sank the winning putt for Team Asia in 2006 returns for her second year and will be hoping for a similar flawless performance. After winning the 2006 Louise Suggs Rookie of the Year Award, 2007 has been equally impressive, enjoying her first million dollar season and winning the ShopRite LPGA Classic.

Similarly positive about her team for the season-ending event, Se Ri Pak said, “Jeong Jang and Seon Hwa Lee are two of the brightest young stars to come out of South Korea and I am pleased that they have both qualified for the Lexus Cup through the LPGA Official Money List. I am confident that all the players in Team Asia will work well together to defend the Cup that we won so memorably last year in Singapore.”

Vince Socco, Senior Vice President, Toyota Motor Asia-Pacific, said, “We are delighted to be able to announce the full line up of players that have earned their spot in the Lexus Cup 2007 through the official qualification criteria. Being sanctioned by the LPGA for the second year makes the team places hotly contested and we are looking forward to an exciting end to the Ladies season.

Some of the best players in the World will be competing at the Vines Resort and Country Club and we look forward to welcoming them to the new venue and showing them the delights that golf in Western Australia has to offer.”

Western Australian Tourism Minister Sheila McHale said that with the growing popularity of women’s golf, it was great a prestigious tournament like the Lexus Cup was coming to Perth.

“This is a fantastic achievement for Perth and Western Australia − it isn’t everyday we get the world’s best female golfers in our own backyard and the event is sure to draw golf fans from all over the world and from our own backyard.”

The remaining players will come from captain’s picks and sponsor’s exemptions and will be announced over the next week in time for the uniforms to be made to measure and the passports ready for a trip down under to Western Australia and the third edition of the Lexus Cup 2007.

The best of the best will join forces and battle it out over three days of play consisting of foursomes, fourballs, and singles. Careful selection of parings will be crucial in the third year of this competition as Team Asia vies to be the only team to retain the trophy after one win a piece and the new venue in Western Australia gives no advantage to either side.

Note: Tickets are available through Ticketmaster

The top four available Asian players from the Rolex Women's World Golf Rankings followed by the top four available Asian players from the LPGA Official Money List qualify for Team Asia. The same qualifying procedure is carried out for Team International. Should players not be available to play in the Lexus Cup or names are duplicated in both rankings, the next best player is picked. Once the top eight players of each team are confirmed, a further two captain’s picks and two sponsor’s exemptions are selected for each team.

About The Lexus Cup

The Lexus Cup 2007 is the 3rd edition of an annual prestigious ladies team event pitting 12 international players against 12 leading players from Asia. The victory table stands at one apiece for each team and the Lexus Cup 2007 will take place in Perth, Australia. Team members are selected based on their rankings and season earnings, including two (2) captain’s picks and two (2) sponsor’s exemptions.

Lexus is the premium vehicle division of the Toyota Motor Corporation. Through its passionate commitment to the pursuit of perfection and the most satisfying automobile ownership experience, Lexus has become synonymous with luxury, quality and innovative engineering since its introduction in 1989. Within a decade, the Lexus brand and reputation achieved remarkable growth and became America's best-selling line of luxury motor vehicles as it entered the new millennium. Lexus cars are sold in North America, Europe, Asia, the Middle East, Oceania, Africa and Latin America.