For the first time ever, all seven* PAC-10 gymnastics teams assembled at the beginning of the gymnastics season for competition.   Hosted by 2010 NCAA Champions, UCLA, at the venerable Pauley Pavilion, this was just the type of “showcase” to spark interest and evaluate the conference talent.  Opening season questions usually take the form of “Who’s hot? Who’s not? Who’s fit? Who’s fat?”  Conspicuous by their absence due to injury were 2010 NCAA vault champion and USA national team member, Vanessa Zamarippa and 2008 Olympic silver medalists, Samantha Pesek – both members the host team. 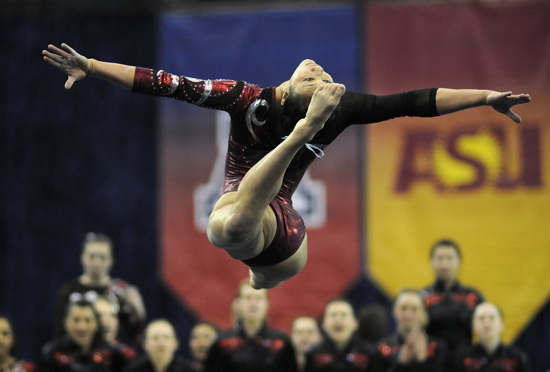 The athletes who performed were spirited and entertaining competition.  With simultaneous competition on balance beam, floor exercise, uneven parallel bars and vault, there was never a dull moment – sensory overload, perhaps.  Spectators were certain to miss more performances than they observed.  At intervals, the team scores were announced but gymnastics is an individual sport.  Partisans supporting a “team” are really cheering for the individuals from the same university.  In the end, the Stanford gymnasts scored highest 196.625.  UCLA was second 195.925, followed by Oregon State 195.375, Arizona 193.825, Washington 193.675, Arizona State 191.850 and California 191.675.


Elyse Hopfner-Hibbs of UCLA was the dominant individual athlete with top scores on the balance beam 9.950, floor exercise 9.950 and the all-around 39.550.  There was a quadruple tie for first place with 9.850 in the vault: Deanna Graham, Arizona; Shelley Alexander and Alyssa Brown, Stanford and Brittani McCullough, UCLA..  Oregon State’s Olivia Vivian took top honors on bars 9.950.


*This is not an oxymoron.  PAC-10 conference members Oregon, USC and Washington State do not have gymnastics teams.