Maintaining control, rather than having to regain control, is a strategy that earned France’s Pauline Courtois and her Match in Pink by Normandy Elite Team of MaĂŤlenn LemaĂŽtre, Louise Acker and Sophie Faguet first place at the 2018 Women’s International Match Racing Series (WIM Series) Finale, hosted at theÂ Carlos Aguilar Match Race (CAMR). This spirit of determination was evident during the first two days of the November 29 to December 2 eventÂ when Courtois’Â team went nearly undefeated in the round robin right through the last race in the finals when Courtois led the start to triumph 3-1 over Sweden’s Anna Ăstling.
Â 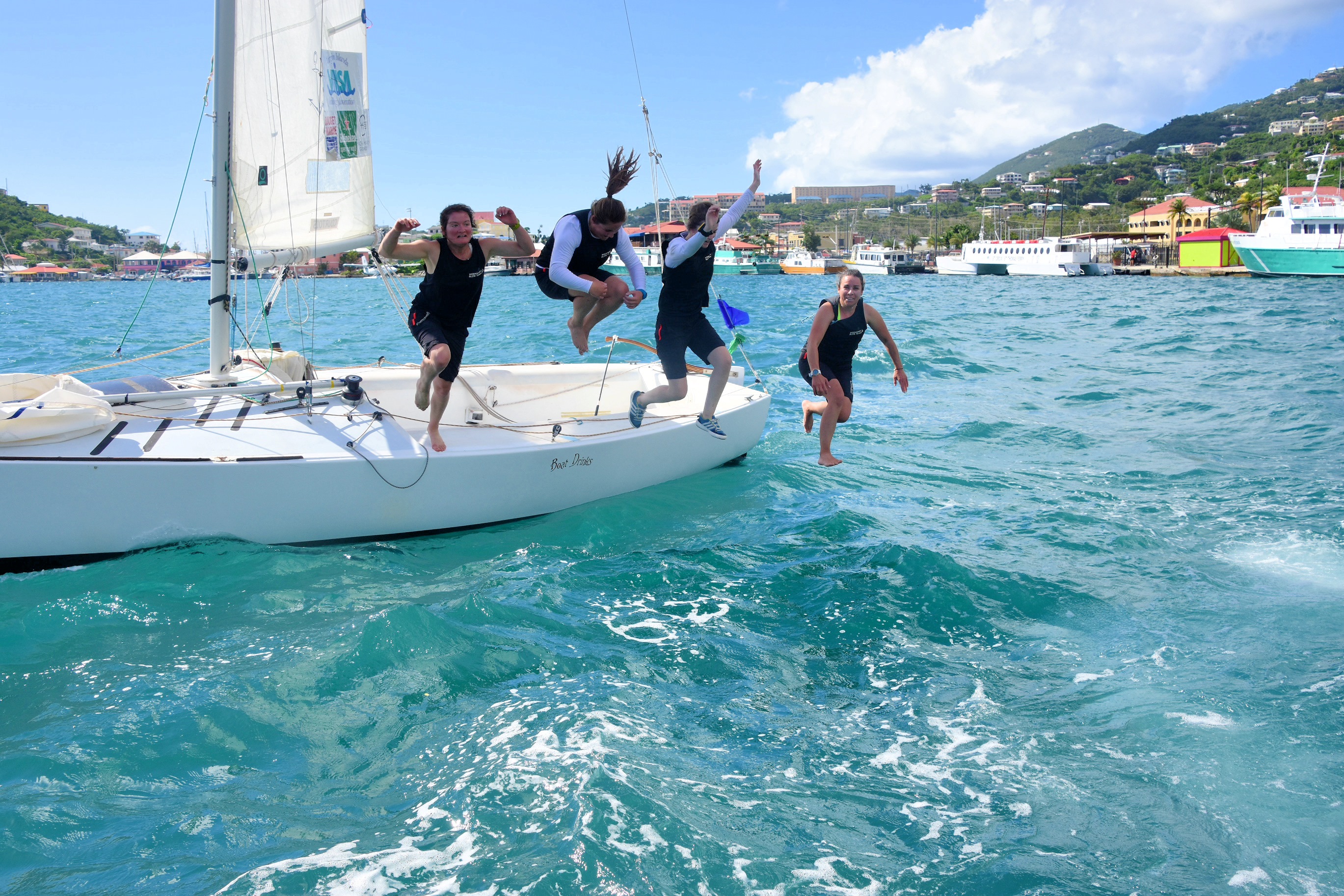 “We won all of our first matches in the round robin except two,” say Courtois, whose loses were to round robin winner, Sweden’s JohannaÂ BergqvistÂ and France’s Margot Riou. “Both of those were very close matches with just a small mistake. After that, we were determined to put everything we had into the knock-out rounds to win.”
Â
True to plan, Courtois and her team sailed through the quarter final matches against the USA’s Janel Zarkowsky winning 3-0. Then, they bested the Netherlands RenĂŠe Groeneveldin the semi-finals also with a solid 3-0 victory. This successful streak stopped in the first-to-three-win finals when Ăstling earned the first match point.
Â
“I knew before the finals that it was important to stay focused, and if we lost one of the matches, to concentrate on those still upcoming. Conditions were challenging too. Winds were very strong and shifty. These two things made it very difficult on the water,” says Courtois, who came back to win the next three matches in a row, the last two by pre-start penalties opponent Ăstling was unable to clear by the finish line. “We achieved this with good starts and good boat handling. I have an amazing team. We have sailed together for two years. It is important to have a good team because without them I couldn’t be a good skipper.”
Â
Courtois also credits the team’s sparring partners back home in France. This is skipper Maxime Mesnil and his Match in Black by Normandy Elite team who this past summer won the French Open of Match Racing.
Â
In addition to Courtois’ championing the WIM Series Finale at the CAMR, her Match in Pink by Normandy Elite team also won this year’s five-race WIM Series. This makes Courtois’ the only team to best two back-to-back WIM Series titles, in 2017 and now 2018.
Â
Meanwhile, while Ăstling was disappointed in not winning the WIM Series Finale at the CAMR, sheÂ sees the well-placed finish as an excellent platform for the future. This year, Ăstling and her Team Anna crew ofÂ Anna Holmdahl White, LinnĂŠa Wennergren and Annika Carlunger only competed in two WIM Series events following the birth of Ostling’s youngest child in March.
Â
“Courtois really nailed the starts and the shifts. Even though we wanted more, we are still happy. After all, we had a long break earlier this year and I look at this event as a good start for next season,” says Ăstling.Â
Â
Twelve teams of the some of the best women’s match racing in the world, representing France, Great Britain, the Netherlands, Sweden and the USA, participated in the 2018 WIM Series Finale at the CAMR.Â
Â
Over US $10,000 was awarded in cash prizes to the teams.Â
Â
Race officials included the USA’s Darcy Cook asÂ Principal Race Officer, Finland’s Chief Umpire Mats Bjorklund, and umpires Sweden’s Tina Ortendahl, the USA’s Kathy Lindgren, Christine Accettella and Charlie Arms; and the USVI’s Ruth Miller and Pat Bailey.
Â
“It’s great to be back to host this event after going through the hurricanes last year,” says the USVI’s Verian Aguilar, co-director and co-founder with Bill Canfield. “It’s so special too that so many teams wanted to come back. We had an excellent level of competition, great conditions and most importantly lots of fun.”
Â
Known internationally for introducing young sailors to the sport, CAMR organizers work cooperatively with the V.I. government and V.I. Department of Tourism in its efforts to get more of the island’s youth out on the water. As such, the CAMR Youth Regatta took place on Saturday. Eleven members of the Boys & Girls Club of St. Thomas-St. John, who have also been enrolled in the Marine Vocational Program, served as crew for the women match race skippers in a best of three fleet race.
Â
Match racing is sailed in two identical boats around a short course, providing fast action close to the crowds on shore. The intense racing is just as exciting for the spectators as it is strategically, tactically and physically challenging for the competing crews.
Â
The CAMR is a World Sailing (WS)-provisional Grade One event.Â
Â
The event is sailed in IC24s, an adaptation of a J24. The boats are provided by the St. Thomas Sailing Center. The Center is located at the St. Thomas Yacht Club, in Cowpet Bay, and offers professional sailing courses, club membership, boat access programs and racing programs.Â
Â
The 2018 CAMR is sponsored by the V.I. Department of Tourism, Virgin Islands Olympic Committee, Virgin Islands Sailing Association, Heineken and Captain Morgan distributed by Bellows International, Patron distributed by Southern Glazer’s Wine & Spirits, Auven Therapeutics, INOVB LLC, St. Thomas Yacht Club, Antilles School, IGY Yacht Haven Grande, Storage on Site, Prior Family Foundation, Theodore Tunick & Company, Budget Marine, Bolongo Bay Beach Resort, Emerald Bay Beach Resort, VInow, Island Business Graphics, XO, Anonymous.