Local knowledge and good sailing lead to a win at the inaugural Normandie Match Cup by the Le Havre-based Match in Pink by Normandy Elite Team lead by Pauline Courtois in blustery conditions. 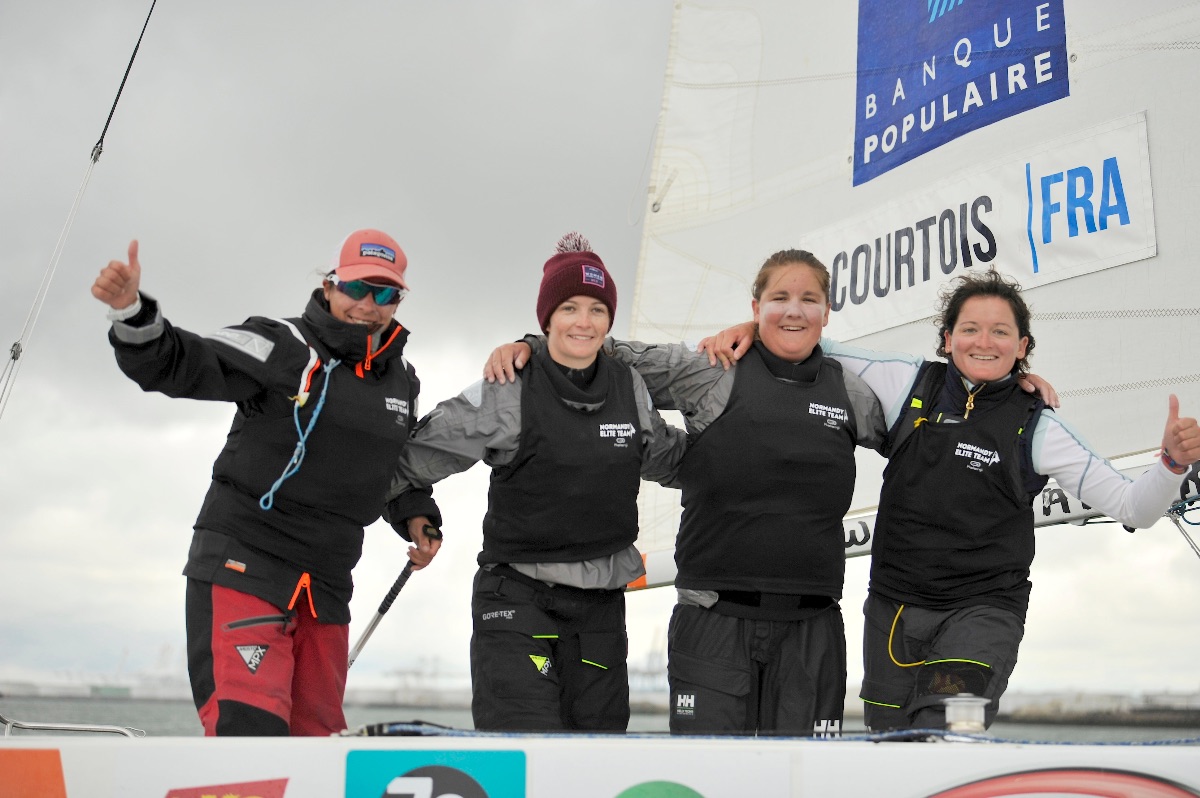 Â
The final day of racing in Le Havre started in the rain with a nice 14 to 17 knot northwesterly sea breeze. The round robin leaders, Pauline Courtois (FRA) and Anna Ăstling (SWE), focused their teams and wasted no time taking care of business in their respective semi-finals.Â
Â
Ăstling and teammatesÂ Annie Wennergren, Linnea Wennergren, and Annika Carlungeras Team WINGS dispatched the other local skipper Margot Vennin’s Matchmoiselle by Normandy Elite Team (Juliette Dubreuil, ChloĂŠ Salou, and Sophonie Affagard) 3-0 in their matches. But it was not without some drama as Dubreuil injured her knee in the first match and as replaced for the rest of the day by Nathalie Corson. (The injury is not serious and Juliette will be back for the next event.)Â
Â
Courtois and her Match in Pink by Normandy Elite Team -Â MaĂŤlenn LemaĂŽtre, Louise Acker, and Sophie​ Faguet- showed the skills that have them on top of the women’s match racing world rankings. By virtue of winning the round robin stage, they chose their opponent for the semi-finals and they chose Marinella Laaksonen’s L2 Match Racing Team from Finland. The French continued their undefeated streak through the semi-finals taking care of the Finns in 3 straight matches.
Â
The Petite-Finals say Vennin’s team rebound from their semi-final performance and knock out MLaaksonen’s team 2-0. “We were able to re-focus and keep things simple. It was good to see that our practice over the winter has paid off and we are looking forward to our next events, especially the Worlds in Lysekil.”
Â
The “Queen of the Castle” kept with the theme and followed suit to maintain the positions from the round robin with Swedish skipper Marie BjĂśrling Duell’s Team Marie coming out on top of the Castle. “We had everything to lose going into today’s racing, so we are happy that we were able to win our match and keep our spot” said a relieved Anna Holmdahl White, Team Marie’s tactician.
Â
Ăstling’s team was able to find a weakness in Courtois’ game and took a 1-0 lead in the Finals. That was short lived as Courtois came back and won the next two matches that were sailed on the outside course.
Â
The last match of the Final was sailed inside the very spectator friendly confines of the commercial port of Le Havre. All commercial traffic was suspended for the duration of the racing giving the sailors a fantastic venue with smooth water and steady breeze to showcase their athleticism. One of the spectators enjoying the racing was Agnes Firmin Le Bodo, Member of Parliament for Seine-Maritime. And she had the opportunity to watch the French team perform.
Â
Courtois and her team -Â MaĂŤlenn LemaĂŽtre, Louise Acker, Sophie​ Faguet– thrilled the local crowd by winning the final match wire to wire. After the win they entertained the spectators while showering each other with champagne!
Â
Most of the teams competing here will be race in the next event on the WIM Series calendar - the Women’s Match Racing World Championship at Lysekil Women’s Match in Lysekil, Sweden August 5-10.
Â
Final Standings - 2019 Normandie Match CupÂ
(skipper, crew; team name, country, WIM Series points, prize money):
Â
1.Pauline Courtois, MaĂŤlenn LemaĂŽtre, Louise Acker, Sophie​ Faguet; Match in Pink by Normandy Elite Team, FRA, 25, 4000€
2.Anna Ăstling, Annie Wennergren, Linnea Wennergren, Annika Carlunger; WINGS, SWE, 22, 2500€
3. Margot Vennin, Juliette Dubreuil, ChloĂŠ Salou, Sophonie Affagard; Matchmoiselles by Normandy Elite Team, FRA, 20, 1500€
4. Marinella Laaksonen, Sofia Tynkkynen, Camilla Cedercreutz, Anna Savisaari; L2 Match Racing Team, FIN, 18, 1000€
5. Marie BjĂśrling Duell, Anna Holmdahl White, Elisabeth Nilsson, Anna Nordlander; Team Marie, SWE, 16, 250€
6. Lea Richter Vogelius, Sille Christensen, Vivi Møller, Joan Wester Hansen; Team Kattnakken, DEN, 14, 250€
7. Margot Riou, ClĂŠmentine Hilaire, Tiphaine Ragueneau, Blandine Jaffrain; APCC Women Sailing Team, FRA, 12, 250€
8. ChloĂŠ Le Bars, Jeanne Le Goff, Eliette Ferronnière, Maïwenn Deffontaines; No Name Sailing Team, FRA, 10, 250€
Â
Results in the finals:
Pauline Courtois, FRA – Anna Ăstling, SWE 3 – 1
Results in the petit-finals:
Margot Vennin, FRA –Â Marinella Laaksonen, FINÂ 2 – 0
Results in the semi-finals:
Pauline Courtois, FRA –Â Marinella Laaksonen, FINÂ 3 – 0
Anna Ăstling, SWE –Â Margot Vennin, FRA 3 – 0