The Silver Ferns have come away with a handful of awards at the 57thÂ ISPS Handa Halberg Awards in Auckland.

The evening was topped with the Silver Ferns claiming the Supreme Halberg Award, the top honour on offer at the prestigious awards.

The Silver Ferns winning the Netball World Cup was also chosen as New Zealand’s Favourite Sporting Moment of 2019 – the only award voted on by the public. 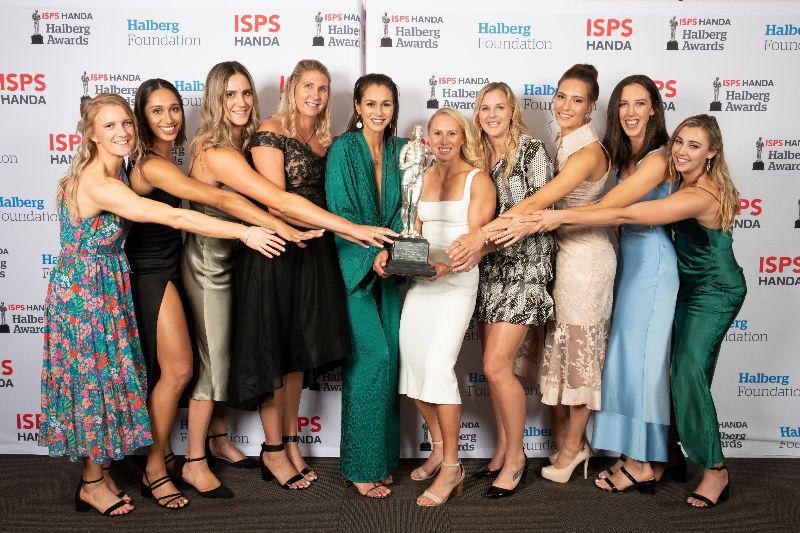 After a spectacular turn-around in fortunes, the Silver Ferns have been recognised as the ISPS Handa Team of the Year.

The Silver Ferns completed a stunning rise back to the top of the podium after clinching a memorable 52-51 win over Australia in the Netball World Cup final in Liverpool in July after a tumultuous previous 18 months.

A long time coming for the old hands, the over-riding joy at the final whistle was palpable. Heading into retirement, it was a fitting finale for outstanding defender Casey Kopua, filling the only gap in a glittering resume with a World Cup title, along with her fellow experienced trio of Laura Langman, Maria Folau and Katrina Rore.

“It’s really humbling to be here and something you dream of as a kid,” Langman said.

“It goes without saying we’ve got a phenomenal leader at the helm (coach Noeline Taurua) and the vision she and her team brought on board was something really special.

“I would like to acknowledge the contribution of our wider squad to the massive 2019 campaign, being able to expose a number of players to international level and Netball New Zealand, who have had to weather a big storm in recent times but it’s been worth it.

“When Kiwis are down and out, that’s when they’re at their most dangerous and that’s what I’m most proud of.”

It was the Silver Ferns first world title in 16 years and the class of 2019 followed in the footsteps of the 2003 winning team, who also went on to claim the Team of the Year Award at the Halberg Awards which acknowledge and honour New Zealand sporting excellence at the highest level.

The accolades flowed thick and fast for inspirational Silver Ferns mentor Dame Noeline Taurua who was named Buddle Findlay Coach of the Year.

It was double delight for Taurua who also picked up the prestigious Sport New Zealand Leadership Award to complete a stunning night.

“I’m overwhelmed and not really too sure what to say,” she said of the unexpected highlight.

“I’m very lucky that I’ve been under the tutelage of a lot of amazing women, in both family and netball, who have led the way and helped me build my leadership skills.”

Having slipped to fourth in the pecking order heading into the sport’s pinnacle event, Taurua took the Silver Ferns on a heady ride following her appointment as head coach 11 months out from the 2019 Netball World Cup.

With just the smallest window of opportunity, Taurua defied the odds by guiding the Silver Ferns from the depths of despair to world champions without a backward glance, galvanising a team and the country while gaining many admirers along the way.

“The Silver Ferns have had a great year and I would like to acknowledge the players for being amazing to coach, the support staff, Netball New Zealand and the tireless efforts that go in behind the scenes,” Taurua said.

“I would also like to acknowledge the other finalists. It’s always going to be a great talking point about the merits of each sport. In regards to coaching, we’re all in the same boat. We do what we do because we love our sport and it’s an opportunity to raise the flag amongst others in other countries and do it with such pride.

“Thanks to everyone who has supported me in my coaching career, it has been a real privilege.”

From being an international player and coach, Willering has made an enormous contribution to netball not only in New Zealand but around the world in helping grow and develop the sport.

Willering was made a Netball New Zealand Life Member in 2018, tonight adding the icing with her Lifetime Achievement award at New Zealand’s premier annual sporting event which acknowledges the pinnacle of achievement across the codes.

“When I arrived tonight, I avoided the red carpet out the front and here I had no choice but to come up via the red carpet,” Willering quipped when receiving her award.

“My passion comes from the continuation of netball and that won’t change. I care for all the people involved out there.

“It’s the moments you have with the people. We had a reunion recently of our 1979 (Silver Ferns) team and just getting back together with all those girls, many who I hadn’t seen for a long time, yet the bond was still there. It was just wonderful and I hope our youth of today have those continued friendships for years to come.

“That’s the main thing with sport it’s the friendships made. I appreciate everything and have done it all for the love of the sport.”
Â