Lampert Leads at Halfway and Hole In One for Kim

Karolin Lampert carded a second successive 68 to climb to the top of the Andalucía Costa del Sol Open de España leaderboard early on Friday – before Christina Kim lit up the course with a brilliant hole in one. 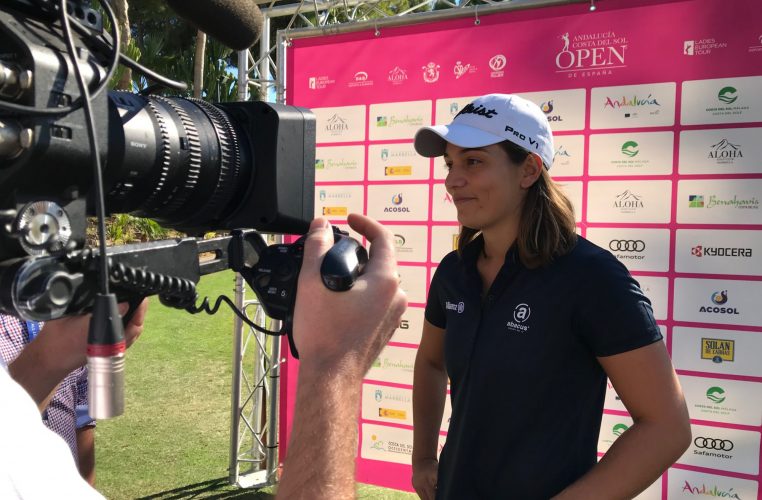 Lampert, from Golf Club St. Leon-Rot in Germany, enjoyed a fine day at Aloha Golf Club in Marbella, ending on eight under par and one stroke ahead of four other players.

Aditi Ashok, Marianne Skarpnord, Anne Van Dam and Nanna Koerstz Madsen, whose 66 was the low round of the day, are tied for second, with Olivia Cowan, Cheyenne Woods and Christina Kim a stroke further behind.

Kim went to the turn in 39, but picked up five shots in her last four holes, ending birdie, birdie, hole in one, birdie, to come back in 32 in a ‘whirlwind finish.’

The American professional golfer, who is known for her outgoing personality, flamboyant dress and animated style of play, said: “It was a good way to end a round, because it was stressful… way more than it needed to be!”

She added: “I was playing wifi golf, you know, driver going right, driver going left, everything going everywhere except for in the bottom of the hole. I just kept telling myself to keep digging, you can do this, make a bunch of birdies on this golf course. Nine holes passed and I thought that was where I wanted to collect most of my birdies and then play defensively on the back nine, but that wasn’t a viable option anymore.”

“Aces always feel great! The last hole in one I made in a tournament was in a Ladies European Tour event, in the Ladies European Masters at the Buckinghamshire, in 2013. Unfortunately, I couldn’t see this one go in, it was 180 yards away and the way that the light was hitting us, we couldn’t exactly tell that it went in. People were clapping and cheering but it was a tentative high five with Aza Muñoz and Anne Van Dam. It was a relief not to have to putt for one hole!”

There was another celebration on the 18th, where she sank a super birdie putt and then fell to her knees, raising her putter to the sky. She said afterwards: “On the 18th, I thought: I’ve got one more shot in me. I hit a good approach shot, flirting with the bunker on the left of the flag and luckily it was good and ended up being a three and not a five. The fact that it went in felt really rewarding and I’m amped for the next two days.”

Lampert’s round was equally impressive. She started with three birdies in a row from the 10th, followed by bogeys on the 14th and 16th for a back-nine total of one under par 35, but made another run of three consecutive birdies from the first. Her third bogey, on the sixth, was countered by a birdie two on the eighth hole.

Lampert, who won the 2015 Azores Ladies Open on the LET Access Series, before missing the cut in the 2016 Spanish Open at Aloha Golf Club, has a secret weapon this week: Sophie Gustafson, one of the greatest European players in history, who is acting as her caddie for the first time.

Beth Allen claimed her maiden victory in the 2015 Ladies European Masters at The Buckinghamshire when Gustafson debuted as her caddie and Lampert is hoping for a similar effect, having come agonisingly close several times.

“I really wanted to try to have a great caddie by my side and see if it helps me. I’m not used to having a caddie by my side, so it definitely helps having Sophie, especially with the pin positions and she is trying to keep me calm, which is great,” Lampert said.

“I was hitting it where she told me to hit it. I didn’t miss a lot of shots, especially with my irons. I played a lot better. I was in good positions off the tee and hit a lot of fairways.”

Three-time LET winner Ashok is returning fresh from a six week break at home in Bangalore and she said that she was eager to get back out on tour.

“I’ve always enjoyed playing in Spain and I have good memories from playing here at Aloha three years back,” Ashok said, after her 67.

However Skarpnord, who could close out the order of merit with a win this week, if Esther Henseleit finishes worse than second, was unimpressed with her 71. She said: “I hit my driver okay today, but my irons and putting were absolutely rubbish.”

Regarding the blisters which were an issue and led to her limping through the first round, she added: “The feet were better today. Our physio Philippa (Stewart) has done a very good job.”

Cowan’s otherwise flawless scorecard (73) was blemished by a triple bogey on the par-4 12th.

She said: “I played really well again today except for on my third hole, where I holed out yesterday. I hit it over the bunker and in the rough. I thought it would be alright but there was a bit of mud on it. I don’t know what happened and I’ve never seen that in my entire life, but sadly that led to a triple bogey. Otherwise I was fighting back and it went well.”

Woods was content with a ‘solid’ 70. She said: “This course suits me. It’s a lot of ball placement and I hit the ball very straight. I’m able to position my game here and I’m putting really well, unlike earlier in the year. I’ve been working really hard and it’s nice to see when it comes together. Right now my game feels really good.”

The defending champion Van Dam is still right in the hunt but Azahara Muñoz, who is looking for a third Spanish Open title, was feeling frustrated with her second-round 70, which put her five shots back heading into the weekend.