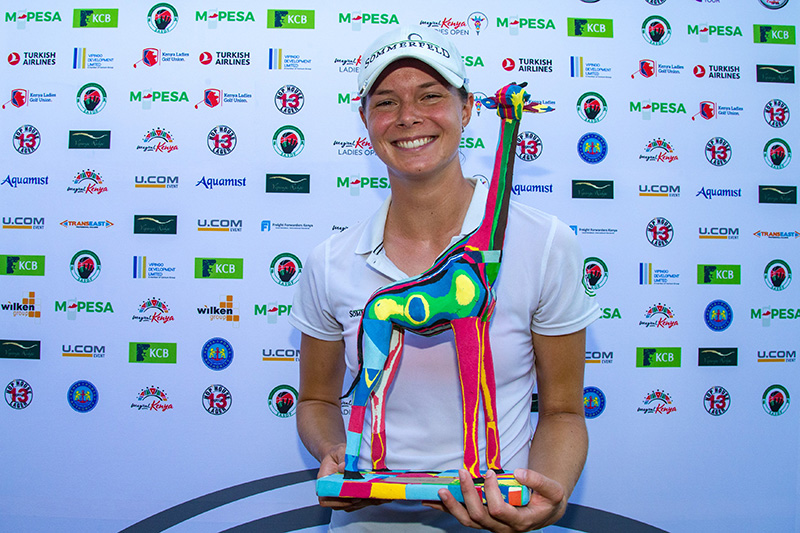 Esther Henseleit carded a course record eight under par 64 to win the inaugural Magical Kenya Ladies Open presented by Safaricom’s M-Pesa by one shot and clinch the Ladies European Tour Order of Merit title on a dramatic final day at Vipingo Ridge near Mombasa.

The 20-year-old first-year professional golfer from Hamburg became only the third player in the 41-year history of the Ladies European Tour to capture the Order of Merit and Rookie of the Year titles in the same season, following Dame Laura Davies in 1985 and Carlota Ciganda, in 2012.

Victory saw Henseleit leapfrog Marianne Skarpnord as the European No 1 and become the first German player to win either the Order of Merit or Rookie of the Year titles.

Henseleit posted eight birdies on the Baobab Course at Vipingo Ridge to post a winning total of 14 under par, one better than India’s Aditi Ashok, who shot 65. Overnight leader Julia Engström ended third after a 74.

Henseleit started the day seven strokes behind Engström but quickly made a charge with birdies on the first, fourth, sixth, seventh and ninth holes to get within two of Engström at the turn.

Engström three-putted the 10th as Henseleit birdied the 11th and the pair were tied on 12 under par. Henseleit pulled one stroke ahead with a birdie from six feet on the 13th hole and then went two clear after Engström bogeyed the 13th.

Henseleit added an eighth birdie from four feet at the 15th to move three strokes clear, but saw her lead cut to one as Ashok birdied the 16th and 18th.

Henseleit ended with three pars to ensure her first Ladies European Tour title, following a breakthrough professional win earlier this year on the LET Access Series, in the Skaftö Open.

Henseleit said: “To close the season with a win is the best feeling I could imagine. To be the Order of Merit winner and Rookie of the Year is just unbelievable.

“Yesterday, after my round, I was a bit disappointed but I just tried to do everything better today. I definitely tried to win, although I knew it would be really hard.

“After nine holes, I saw I was two shots back and I knew it was possible.

“I just tried to make a lot of birdies and I hit some great iron shots and gave myself many short birdie putts. The course was beautiful and it played a bit easier today, because the greens were softer. I did the best I could.”

Henseleit, who finished third at LET Qualifying School 12 months ago and turned professional in January with a handicap of +7.1, knew that she needed to win the Magical Kenya Ladies Open to snatch the Order of Merit and she delivered under pressure.

She said: “It’s been a great year on the Ladies European Tour. It’s a really friendly tour and it’s been great to travel the world each week with all the other golfers.”

Winners of the Order of Merit