They had the world champion and the female pentathlete of the year chasing them, but there was no stopping Egypt on the final day of the UIPM 2019 Pentathlon and Laser Run World Championships.

Wearing smiles as wide as the Danube, Salma Abdelmaksoud and Eslam Hamad (EGY) celebrated a mighty victory that was all the more impressive for the identity of the athletes who joined them on the podium.

Silver went to the celebrated France duo of Elodie Clouvel and Valentin Belaud. Twenty-four hours earlier, Belaud (FRA) had been crowned Men’s Individual world champion for the second time and his girlfriend Clouvel (FRA) was named Female Pentathlete of the Year at the UIPM 2019 Annual Awards (see full list of winners below).

Bronze went to Belarus after good partnership work between Anastasiya Prokopenko, the 2018 world champion and Female Pentathlete of the Year, and Ilya Palazkov. 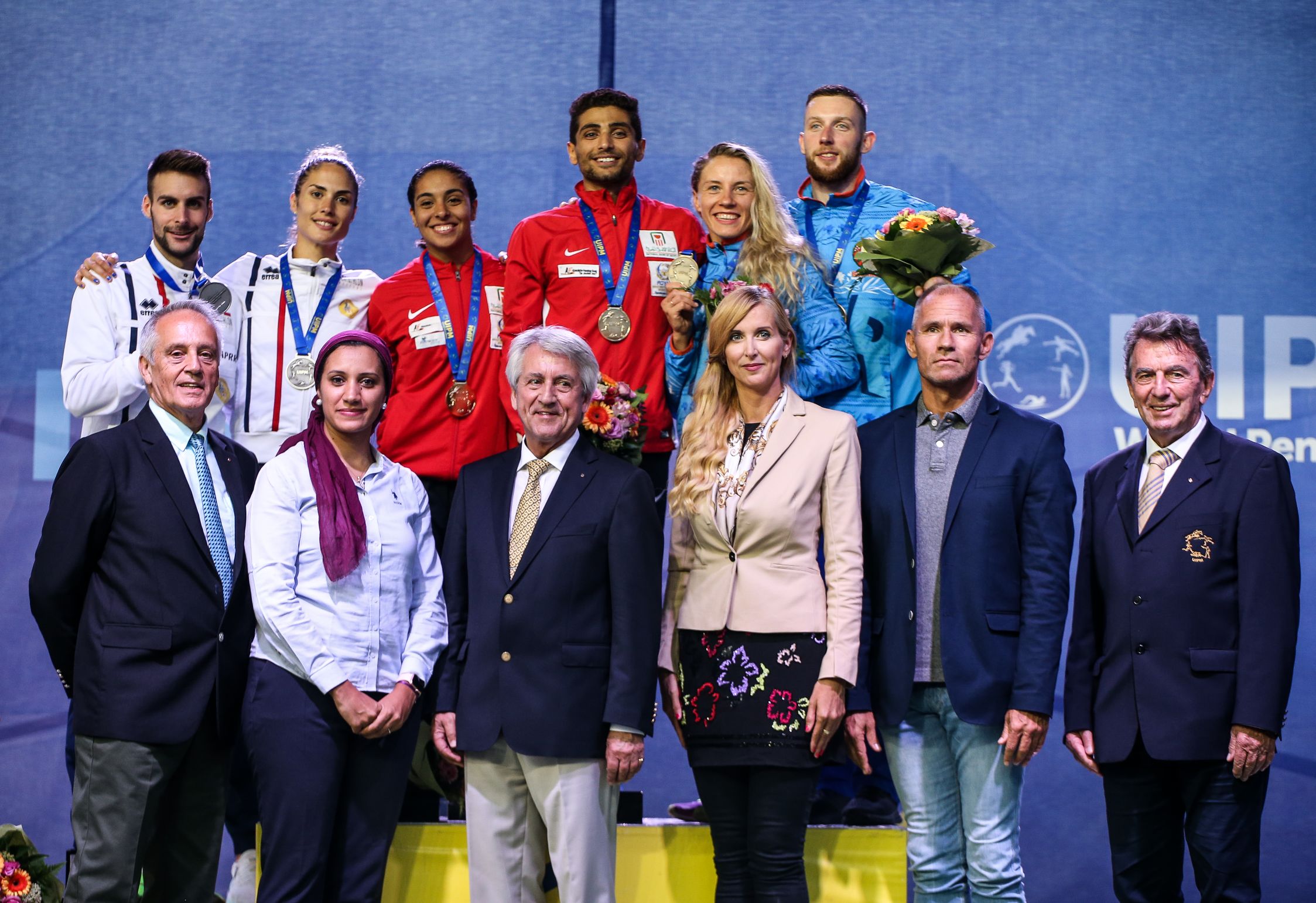 Hamad (EGY) said: “I feel fantastic. It's my first gold medal in the Mixed Relay, I had a silver medal in 2017 in the Men's Relay with my team-mate, and today we were aiming just to be on the podium to repeat the glory we had in Egypt.

“Today was an unbelievable day – we managed to lead the competition from the beginning, which is a very new experience for me.

"In the first round my horse made a lot of mistakes, and I was focusing on trying not to make the same mistakes as the first rider. I just got him to the finish line and I was so happy with my horse.

"I want to say thank you to all my supporters, my coaches, the federation and my family. I had a very good competition in the individual, with a top-eight finish, which is very good preparation for Tokyo and I hope I can keep up.

"Salma has always been a very good partner. She has a good attitude and she is very calm, she can perform under pressure – as you saw today in the shooting."

Silver medallist Clouvel (FRA) said: “I'm so happy to finish with a medal from these World Championships, and with Valentin. Today I'm so, so, so tired but I just told myself, 'it's finished after, go go go!'

“My partner is perfect, he's the world champion, and I'm so happy and proud of this medal."

Palazkov (BLR) added: “I can run, I was starting to catch Belaud at the second shooting, but he is so powerful. We had a really good shooting and we're happy with 3rd place. We just had fun."

Expectations were high in the home crowd after two medal-free days for Hungary, and there was a strong start in the pool as Michelle Gulyas and Bence Kardos set the fastest time of 1min 54.98sec. 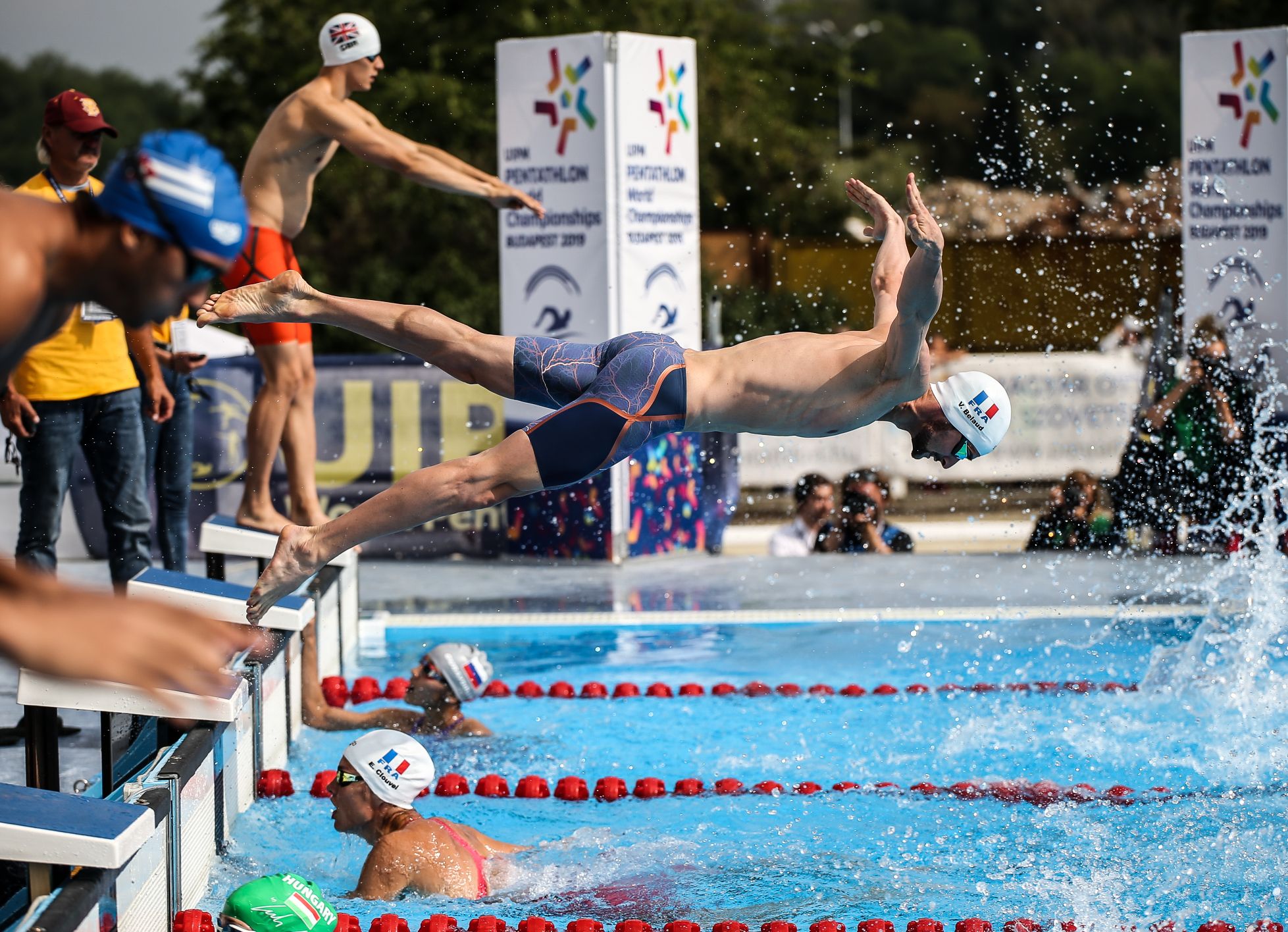 It was on the piste that Egypt (Abdelmaksoud/Hamad) asserted themselves on the competition, scoring a remarkable 33V/7D. That gave them a hefty overall lead, even though Russia (Gubaydullina/Lifanov) added two bonus points after ending the Ranking Round with 27D/13D. 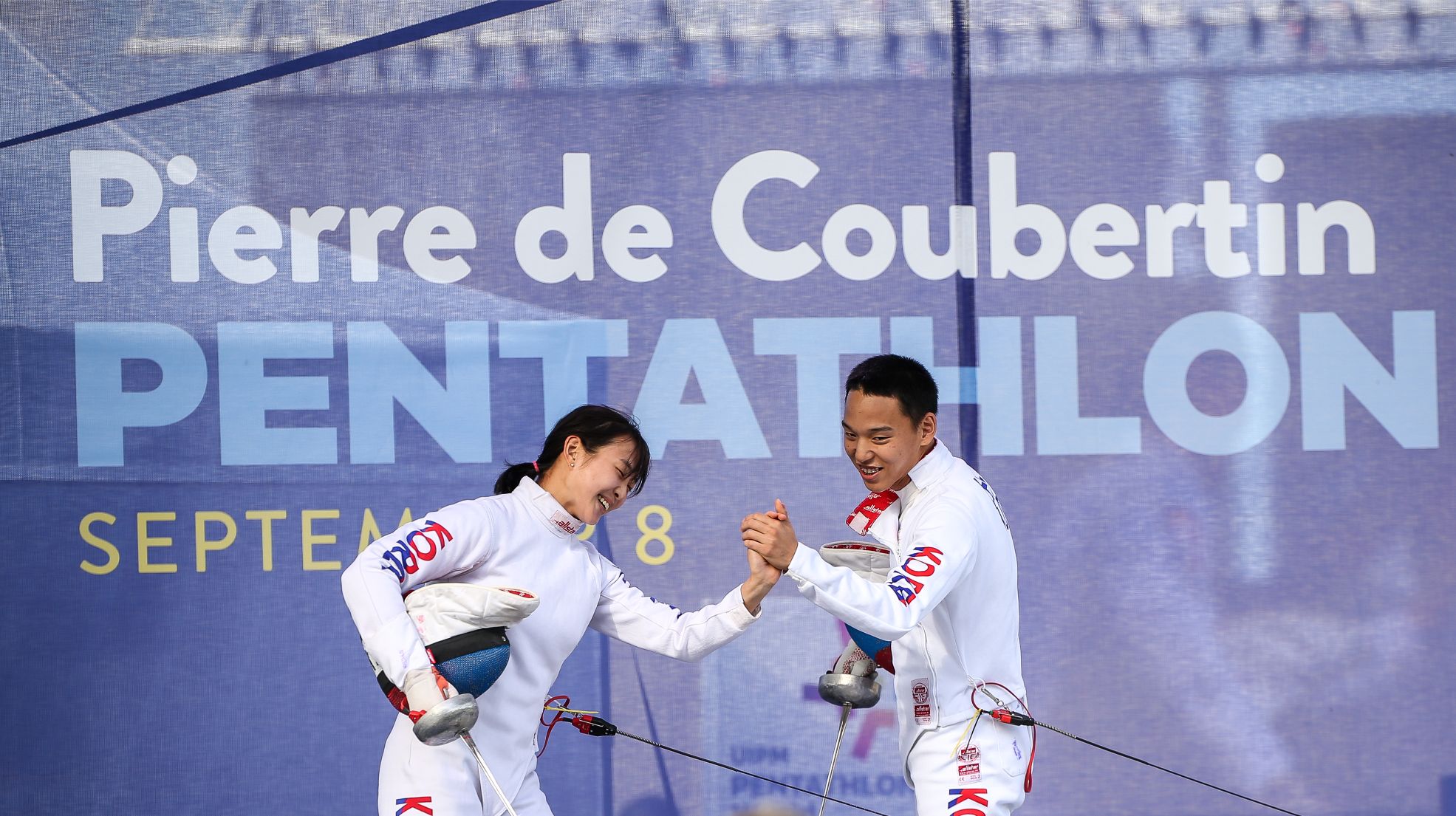 The Riding event was not without drama and the hopes of Belarus (Prokopenko/Palazkov) took a dent as they dropped 27 penalty points, but that was nothing compared to the ordeal suffered on horseback by Russia (Gubaydullina/Lifanov).

The Russian duo were lying in 2nd overall until their equine calamity. First Gubaydullina (RUS) had a refusal and an obstacle penalty, and then Lifanov (RUS) had even more problems – finally they scored 230 and that was the end of their gold-medal challenge.

Egypt (Abdelmaksoud/Hamad) sensed their opportunity and took full advantage with a serene round, conceding only eight time penalties. Hamad (EGY) shook his fist in delight and the backup team celebrated vigorously in the tribute, knowing that a 41sec lead would be almost impenetrable in the Laser Run. 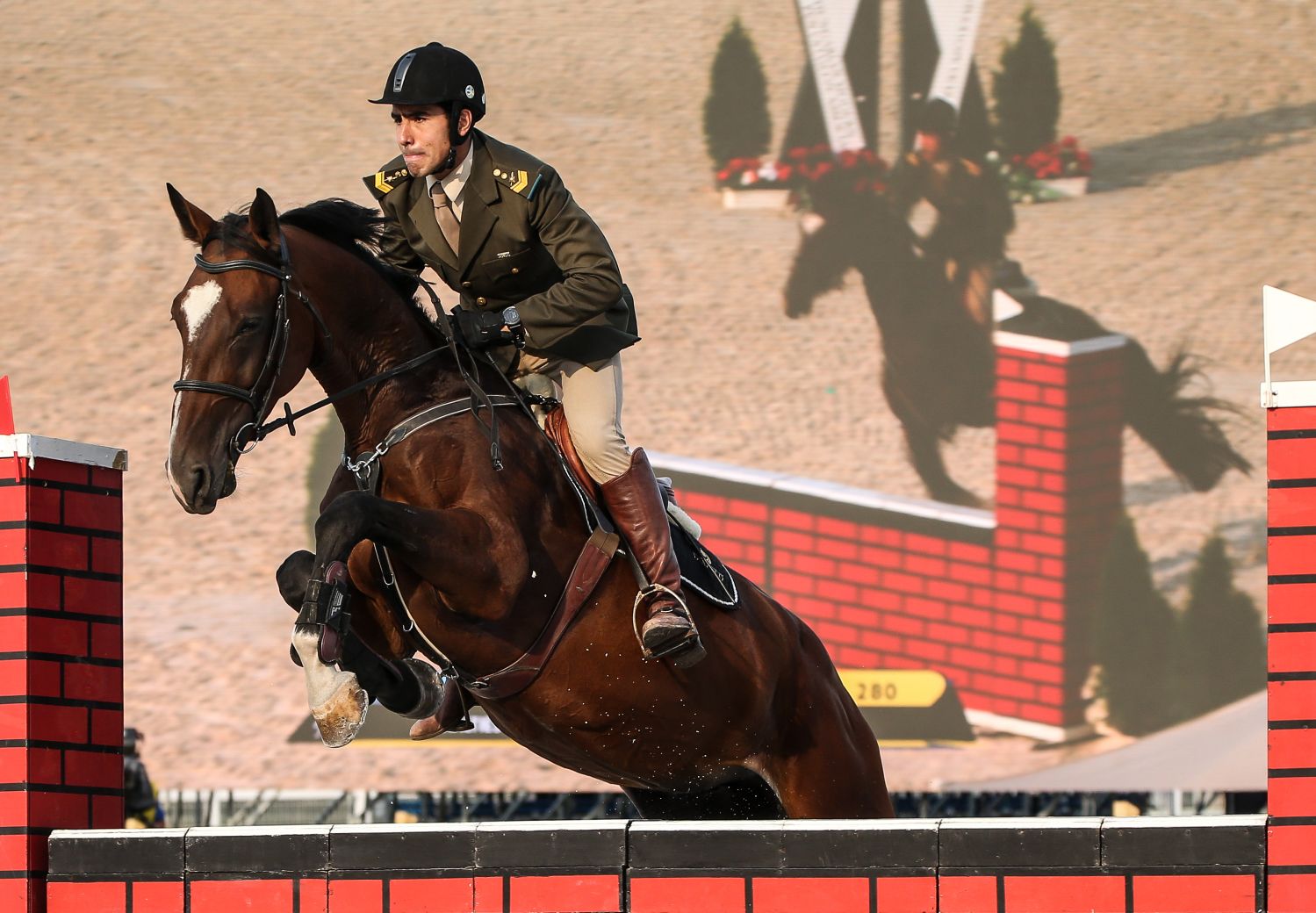 Abdelmaksoud (EGY) shot well on both visits to the range, but her running speed was sluggish compared to that of Schleu (GER), who cut into her lead significantly. But when the leader handed over to her partner, Hamad (EGY) set off like a hare on his first lap and it looked all but certain that the gold would be heading to North Africa.

Further back, there was an intriguing battle between Belaud (FRA) and Palazkov (BLR), eventually won by the 2016 and 2019 new world champion.

Visit the UIPM website or download the “UIPM Central” app to find all results from the UIPM 2019 Pentathlon World Championships. 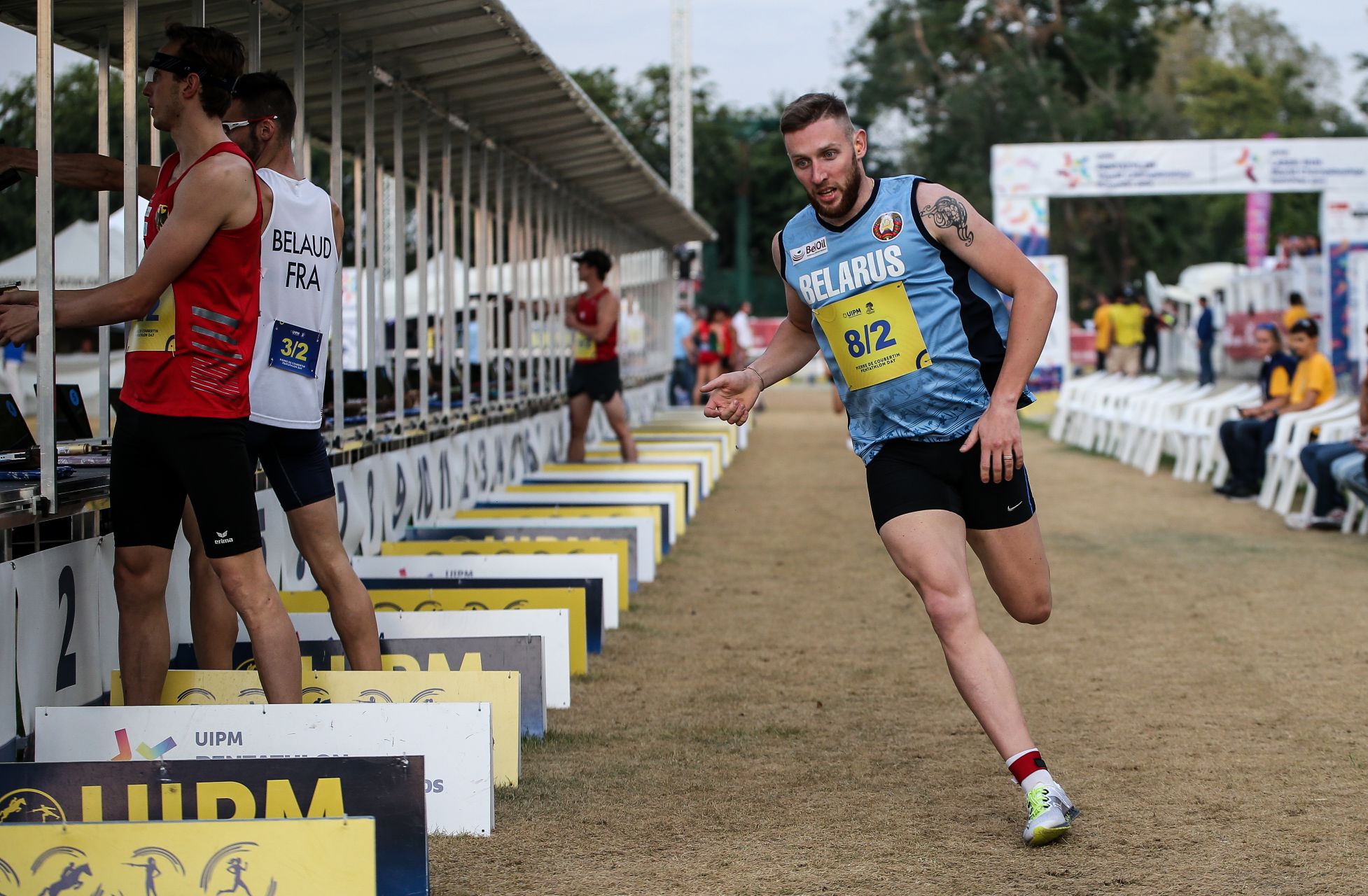 UIPM President Dr Klaus Schormann said: “A long and great season of UIPM competitions has come to an end with an excellent Pentathlon and Laser Run World Championships here in Budapest.

“Combining the two championships is not easy for an organiser but the Hungarians are a special pillar in our Union and therefore we could trust them to create a Pentathlon Arena where all five disciplines of the Pentathlon can be viewed by spectators from the same seat.

“We had observers from Xiamen in China here, and they have seen a good presentation of our sport to use as a platform for the UIPM 2020 Pentathlon and Laser Run World Championships.

“We still have the Asia/Oceania Championships and Olympic Qualifier to come later in the year, but this Mixed Relay today was a wonderful climax to the season for many of our best athletes who have been working hard to secure qualification for the Tokyo 2020 Olympic Games.

“That process will continue next year and we are already looking forward to it very much.”

A special ceremony took place on the podium stage at Kincsem Park to mark the 2nd Pierre de Coubertin Pentathlon Day in honour of the sport’s founder.

Among the dignitaries on the stage was Alexandra de Navacelle Coubertin, a direct descendant of the founder of Modern Pentathlon who sits on the UIPM Pierre de Coubertin Commission and the International Olympic Committee’s Commission for Culture and Olympic Heritage.

The 2nd Pentathlon Day acted as a launchpad for the #High5 campaign, which encourages people around the world to show their support for the Coubertin legacy by publishing a #High5 on their social media pages. 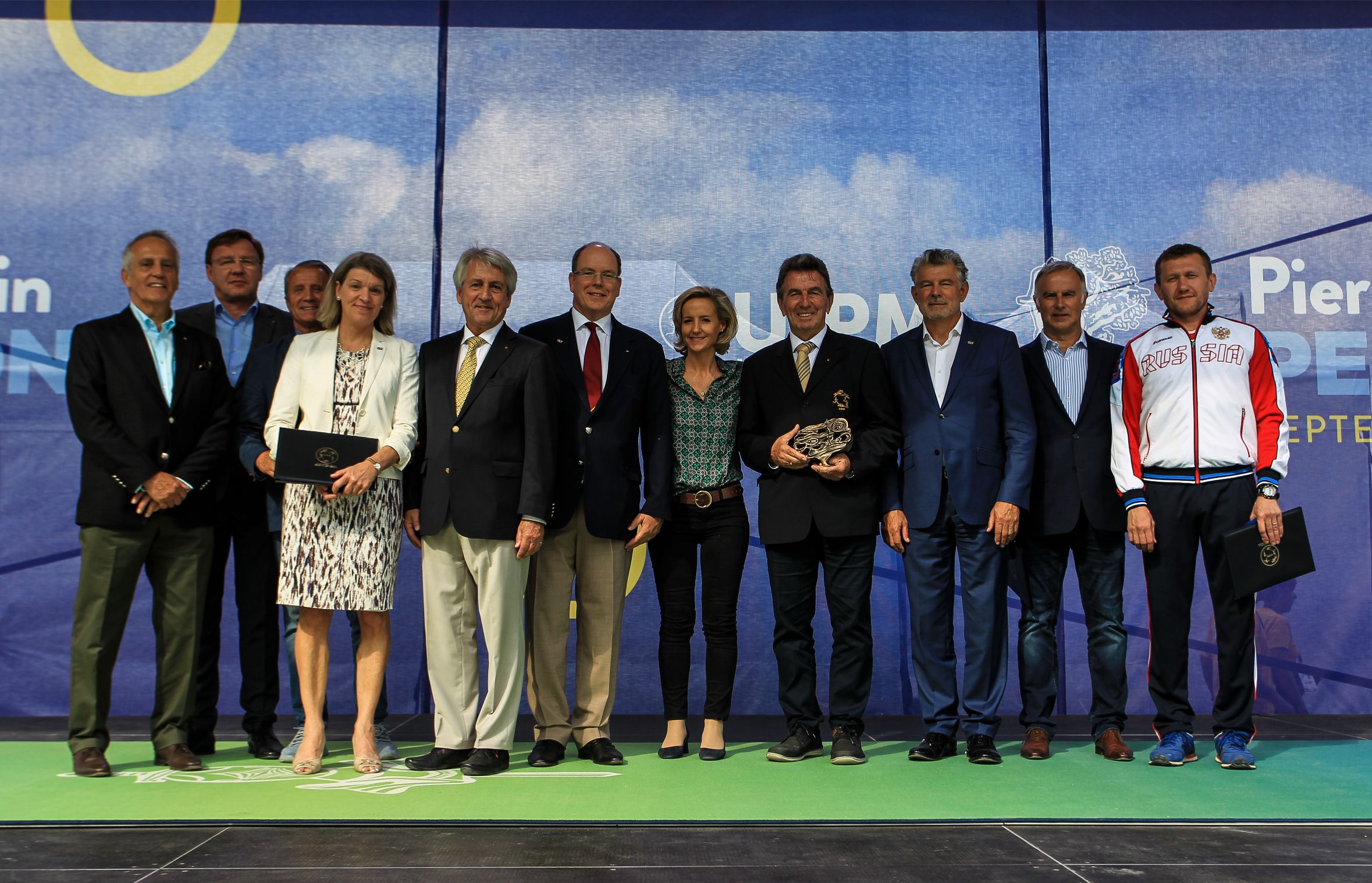 Clouvel (FRA) and Joseph Choong of Great Britain won the top prizes of Female and Male Athlete of the Year respectively at the UIPM 2019 Annual Awards Gala Dinner in Budapest on September 7.

There were Development Awards for Thailand and Peru and the UIPM Honorary President, HSH Prince Albert II of Monaco, was inducted into the UIPM Hall of Fame.