Double delight as Argentina are Tokyo-bound

It was a double delight for Argentina in Peru as both the men and women won the Pan American Games and earned the right to compete at the Tokyo 2020 Olympic Games in the process. 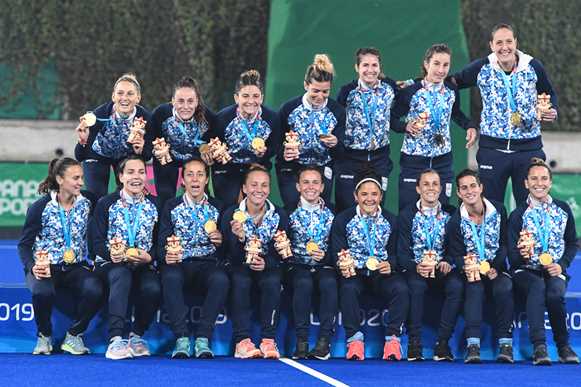 Argentina are just the second nation to seal their spot at next years XXXII Olympiad joining host nation Japan, whose men’s and women’s teams have qualified twice, once as hosts and then as Asian continental champions.

It was Canada who came runners-up to the South American team in both the men’s and women’s finals but, despite strong performances from the Canadians, they were no match for their southern neighbours, with the women running out 5-1 winners and the men winning 5-2.

Both USA men and women took the bronze medal, beating Chile in both matches, but they will have differing feelings as they reflect on the results. For the men, bronze indicates their improvement and progression in recent months and this is their first medal at the Games since 1995. For the women, a bronze is their lowest finish at a Pan Am Games since 1991 and they are sure to move down the FIH World Rankings as a result.

In the women’s final it was the Silvina D’Elia show. The defender, who returned to the squad in January 2019 after a temporary four-year retirement, scored twice and put in an impeccable performance in defence to help deny the Canadian attack force of Brienne Stairs and Stephanie Norlander.

Julieta Jankunas also scored a double, sealing her place as the tournament’s top scorer with 11 goals, all from open play. Another returning retiree, Carla Rebecchi, made it five goals for the South American team.

Canada pulled one back through captain Kate Wright and, for much of the match, the Canadian midfield certainly kept pace with the Argentina side, the difference between the teams was in the two attacking circles where both Argentina’s defensive qualities and their attacking powers were superior.

While Argentina were delighted to have sealed their trip to Tokyo, Canada will also see this event as a great preparation for their second stab at Olympic qualification at the FIH Olympic qualifiers later in the year.

In the bronze medal match, USA overcame Chile by a 5-1 scoreline with a hat trick from teenage scoring sensation Erin Matson.

The match between USA and Chile match was fast-paced and entertaining, with both teams scoring within three minutes of the start of the game. USA’s Lauren Moyer opened the scoring, with Chile’s Consul de las Heras evening things up. USA captain Kat Sharkey also found her way onto the scoresheet with a rasping strike from the top of the circle.

In the men’s final, the reigning Olympic champions were in fine form as they scored five goals past Canada for a 5-2 victory. Jose Tolini notched two, while Maico Casella added one. The goals put the two strikers at the top of the scoring table with 10 goals each.

Lucas Martinez and Martin Ferreiro also got on the board while, Canadian drag flickers Scott Tupper and Gordie Johnston scored for Canada.

It was Canada who opened the scoring through captain Tupper but Argentina answered within the minute. From that point on, Argentina upped the ante in both their attacking speed and ferocity and their defensive discipline.

While Canada tried everything to remain within touching distance, Argentina were a class apart and the gold medal was just reward for a comprehensive campaign at this event.

Like the women’s team, Canada now head to the FIH Olympic Qualifiers in a second attempt to qualify for Tokyo 2020.

In the bronze medal match USA edged Chile 2-1, improving on their two fifth place finished in 2015 and 2011. The Chileans who have won bronze at the last three editions of the Pan American Games were forced to settle for fourth.

Deegan Huisman and Aki Kaeppeler scored for the USA, while Felipe Renz’s answered for Chile in the fourth quarter.

At these games, two umpires reached the 100 international games milestone. USA umpire Gus Soteriades reached the landmark In the semi-final between Chile and Canada, while Catalina Montesino became the first Chile umpire to reach the 100 mark as she took charge of the women’s final.